During this past holiday season, for those who celebrated Christmas and Hanukkah, in the candlelight of our Menorah and Christmas trees, we remember that all the darkness in the world cannot extinguish the light of a single candle. During this season, I also contemplated the “Night Journey” of the Prophet Mohammad, peace be upon him.

In the year 621, the Prophet made a journey by night from the Great Mosque in Mecca to what is now The Dome of the Rock, Al Aqsa Mosque in Jerusalem. On this journey, he rode a winged white horse, by the name of Buraq, translated as “Lightning” and he prayed with the great prophets, Abraham, Moses and Jesus. The name of his flying horse, “Lightning”, lends new and more hopeful meaning to the poetic words of the playwright, Tennessee Williams:

Nowadays the world is lit by lightning.

In the world’s darkness, we all seek those flashes of illumination wherever they may be found, and as we try to navigate our lives, we all rely upon the prophetic voices of those who have come before us.

On the night in which Jesus was born in a manger, Magi, followers of Zoraster, were even then en route to Bethlehem. Where Mohammad rode “Lightning”, the Magi, following a bright star in the East, rode their camels some 2000 miles to the birthplace of one who would endeavor to bring God’s Love to all Creation. In his life and teachings, he would remind us that, “God became as we are so that we might become as God is.” (William Blake).

Much earlier, a Jewish shepherd in the land of Midian, saw a burning bush, which ignited his passion to free his people from the injustices from which they suffered. This marked the beginning of a long journey across the wilderness in search of a more promising future. Struggling with his people’s tribalism and quarrels for power, Moses said, “Would that all the Lord’s people were prophets.” (The Book of Numbers.) Heeding that plea, historically, Jews have been at the forefront of struggles for Human Rights, and indeed, we’re honored to have two on our board of directors, Mike Winterfield and Mark Braverman.

So it is with the mission of our Tree of Life Educational Fund. As we are overwhelmed by the darkness of the land, with all its political corruption, greed, nationalism, tribalism, fear and war, we need to learn from the wisdom of the prophets, past and present, so that we too can add our own prophetic voices to this troubled world.

Each year, like Mohammad, Tree of Life travels to the Holy Land allowing travelers to pray with the prophets of old. Like the Magi, we travel to the West Bank City of Bethlehem with the hope that we might become the children of God we were created to be. In many prophetic voices of conscience – Jewish, Christian and Muslim – we have the privilege of sitting at the feet of those who struggle to make this a better world for all Creation. Thanks to the leadership of Ghoufran Allababidi assisted by Coleen Keyes and Laura Fitzpatrick Nager who served as chaplains, 23 travelers of different ages and faith orientations took part in our March “Mothers of a New Creation” journey. Tragically, one of our travelers, Nadia Milleron learned just the day before departure that her daughter was among those who died on a Boeing flight in Ethiopia. Unable to go, Nadia and her family were very much in the prayers of the travelers and those of us back home.

One of the goals of these journeys is not only to learn from the prophetic voices of Palestinian, Syrian and Israeli voices of conscience, but also to help our travelers to reclaim their own prophetic voices. We especially want to provide this opportunity for young people, and thanks to the generous support of all of you and other members of our Tree of Life community, we were able to offer a record number of 7 travel scholarships to college age young people. We are even now in preparation for our March 2020 journey, “In Search of Hope”, and it seems that once again, we will be able to make it possible for a number of youth to participate.

Thanks in large part to the inspired leadership of John Fussell assisted by many other dedicated volunteers, Tree of Life placed a high priority on advocacy initiatives, especially in support of Representative Betty McCollum’s legislation, H.R. 2407 in defense against the incarceration and mistreatment of Palestinian children. Many organizations and individuals signed on as endorsers of our resolution in support of that bill, but many more are needed if we are to persuade our congressional representatives to co-sponsor this bill. Also, we have remained ever vigilant and responsive to anti-BDS legislations wherever it has surfaced. In our advocacy efforts we work in close partnership with Jewish Voice for Peace — New Haven, the U.S. Campaign for Palestinian Rights, Defense for Children International – Palestine and members of the Trade Union Community. Also, in partnership with Friends of Sabeel North America, we raised a voice of opposition to Christians United for Israel led by Rev. John Hagee.

For our Fall Tree of Life Series, “Will There Really Be a Morning”, we were most honored to feature the remarkable parents of Rachel Corrie — Cindy and Craig Corrie. Also, we were very pleased to welcome young Palestinian visitors from Hebron and Bethlehem — Rawan and Sofian, Dalia, Tamer, Nadine and 2 year old Hani. Sadly, Lama from Gaza wasn’t able to get the permit and visa to come, but we were all touched by her video from Gaza that we offered at each event. These young people shared their poignant stories of life under occupation and demonstrated the dignity, resilience and tenacity of their Palestinian identities. We all should be very grateful that Mazin Qumsiyeh, one of our highly esteemed advisors, met with them to help prepare them for their visit. 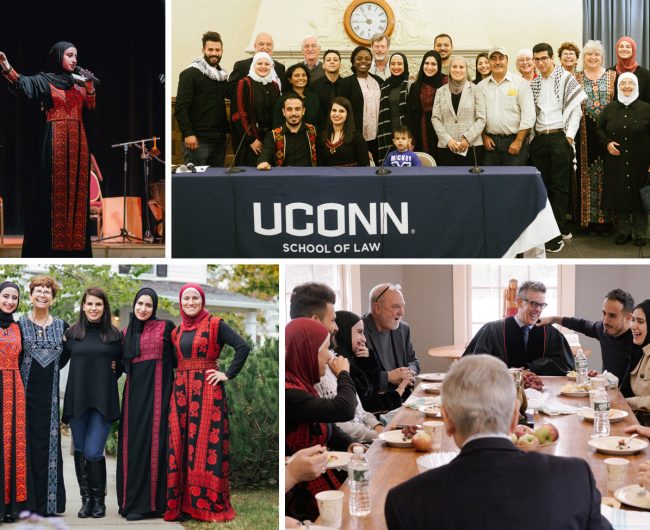 Thanks to the prophetic voices of Craig, Cindy, Mark Braverman, Rabbi Meryl Crean of Jewish Voice for Peace and Meera Shah of Palestine Legal, those in attendance at our various venues learned how we, the American people, need to be the answer to that question, “Will There Really Be a Morning.” In presentations at the Artists Collective in Hartford, the morning services of the First Congregational Church of Old Lyme, the morning service of Avon Congregational Church, Palestine Museum, a visit to the Center for Palestine Studies at Columbia University, a living room on Riverside Drive in NYC, the Kamora Cultural Center in Hartford, a partnership between a church and mosque in Avon, Yale Law School and Uconn School of Law, Trinity College, a classroom at UConn Storrs, a Unitarian Universalist Community in Keene, New Hampshire, Episcopal and Lutheran churches and public schools on Cape Cod nearly 1500 benefitted from these prophetic voices and hopefully were inspired to find their own voices of conscience. 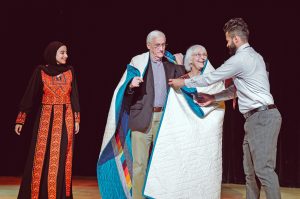 At many of the venues for our Tree of Life Series — from the Artists Collective in Hartford to a Lutheran Church on Cape Cod, our young Palestinian visitors bestowed a Morning Star Quilt on Cindy and Craig Corrie.  The quilt, made by a Lakota artist on Cheyenne River Sioux Indian Reservation incorporates the Morning Star, a sacred symbol for the Lakota, a reminder of how the Morning Star, the last light in the darkness before the rising of the sun, is a symbol of new life, as if the Morning Star looks out over the horizon and says to the dawn, “don’t worry, I’ve got your back!  I will keep on shining to show that light cannot be defeated by the darkness.”    In presenting this quilt to the parents of Rachel Corrie, our young Palestinian visitors said, “Thank you for being the Parents of Rachel Corrie.  Thank you for raising up a child who cares about human rights!  You and your daughter have been a Morning Star for the people of Palestine!

Finally, I want to thank each one of you for your dedication and support. The Arabic word, Siraj, means torch, and so I thank you for helping Tree of Life to be a Siraj — a light in the darkness, sometimes a barely flickering candlelight, sometimes more like Lightning streaking across the sky, sometimes a Burning Bush, sometime a word of enlightenment, a Morning Star, a reminder, that thanks to the prophetic voice that God has given us that yes, indeed, “There Really Will Be a Morning!” Let us live in that hope!

My prayers are with you and your families during these Holy Days and Holy Nights!

Knesset Member to Speak in Conn.

Speak Out for Palestinian Lives