Each year at our Tree of Life annual meeting, we present our Siraj Awards to those who have distinguished themselves by their volunteer spirit. In their own quiet ways, they have helped to strengthen the work we do.

The Arabic word “Siraj” means torch, and it’s good to remember those who have been torchbearers for us. Tree of Life relies upon those with a passion for human rights and human decency, those who take seriously Jesus’s words “You are the light of this world” and those who refuse to have their light extinguished by the forces of darkness and despair.

This year our Tree of Life Board of Directors has selected two to be the recipients of our Siraj Award. At our annual meeting and picnic on June 15, 2019, candlesticks carved out of Palestinian olive wood were presented to Nicholas Westbrook and Mary House. 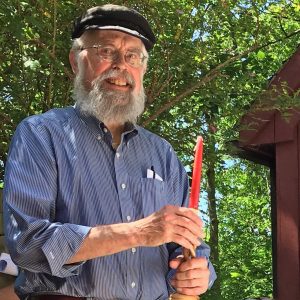 For many years, Nicholas Westbrook has quietly led our olive oil, zaatar and olive oil soap initiative. Blessed are those who work behind the scenes doing a ton of work – and in this case, more than a ton of work! Thanks to Nick’s leadership, Tree of Life sold close to 1.5 tons of olive oil last year!  We refer to every bottle of Palestinian olive oil as “Education in a bottle” because for about $900, we make it possible for a Palestinian student to go to university for one semester.

Relying upon our network of dedicated volunteers and a number of depots and with Nick at the helm, Tree of Life sells olive oil, and other Palestinian products such as Zaatar and olive oil soap, to support our Palestinian academic scholarship programs, one centered in Gaza and the other in the Aida Refugee Camp in Bethlehem. Ranging in amounts from $300 to $1500, we helped more than 20 students last year at six Universities in the West Bank and Gaza!

And it’s not only students who benefit, but also the Palestinian farmers who, despite the Apartheid Wall, the expansion of the illegal settlements, and the deliberate destruction of their sacred olive trees – their Tree of Life – provide us with organically grown and fair trade olive oil for us to sell.

Nick works with a Palestinian business man – another beneficiary of this program! – to import the oil and make it available to our depots (we’re always in search of another depot!). Under Nick’s creative guidance, beautiful Tree of Life gift bags were created along with a tag for each bottle that helps to tell the story of what we do with the oil. Some of us, instead of a bottle of wine, bring a bottle of this delectable oil as a house gift to help tell the story of what we do.

Tremendously well organized, Nick arranges for our shipments, keeps track of our inventory and helps to arrange transportation to our depots.  You’ll see him at our programs offering a sampling of pita dipped in olive oil and zaatar, and he’s mastered an olive oil cake using a recipe from the Gaza Kitchen, written by Laila el-Haddad, one of our Tree of Life Advisors.

In biblical times, olive oil was used not only for culinary purposes but also as fuel for a lamp – Siraj. In the prophecy of Isaiah, the prophet says, “A bruised reed he will not break, and a faintly burning wick he will not quench.  He will faithfully bring forth justice.” 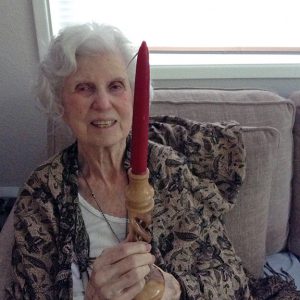 Our Tree of Life Vice President, John Fussell, is the son of Mary House. Given John’s extraordinary leadership, especially in the advocacy work he does, that in and of itself would qualify his mother for a Siraj Award. Clearly she raised her son to be an unflagging champion of human rights and the principles of our American democracy.

At 97 years of age, and energized by her Christian convictions, Mary continues to be an amazing example for us all, refusing to allow the limitations of her age to quiet her deep and abiding determination to make this a more just and peaceful world. Surely Mary is a bright “torchbearer” for us. She teaches us to live not only with grace and dignity but also with passion and determination to remain engaged in the struggle for Palestinian justice.

Mary continues to be a student of what is happening in Israel and occupied, colonized Palestine. She has read extensively on this issue, but her interest is more than academic. She’s one of our most generous volunteers. Single handedly she has underwritten our Tree of Life program at the Artists Collective this next October, and she has made further contributions to help strengthen our advocacy efforts.

Another Arabic word – Jihad – is perhaps the most misunderstood word in the Arabic language. Those who exemplify cruel Islamophobia would reduce this word to an epithet.

We all would do well, whether we’re Muslim, Jew, Christian or any other faith, to keep in mind that “Jihad” means struggle. All of us should engage in a non-violent struggle to make this a better and more just world for future generations. Faith without struggle is vacuous and meaningless.

Sometimes that “jihad”, that struggle, is with the principalities and the powers, the political forces of settler-colonialism so manifest not only in the State of Israel but also in the complicity of our own country.
Sometimes also that “jihad” is with ourselves  – an inward struggle – and our temptation to retreat or be silent or engage in escapism, ignoring the cries of children detained and tortured under the cruel US supported Israeli military occupation.

Thank God for the wonderful example of Mary House! Thank God for those who live out what Tennyson meant when he said, “Some work of noble note may yet be done. Come my friends, Tis not too late to seek a newer world.”  Thank God for those who even at 97 years of age refuse to be silent!  Thank God for those such as Mary who every day, despite the vagaries of their physical limitations, say with their lives what the poet William Blake said with his words, “I will not cease from mental fight till we have built Jerusalem.” That’s a jihad worthy of us all!

Mary never misses an opportunity to persuade others to think of themselves as “citizens of the world.” When her nurses and caregivers come for a visit, she quietly teaches them by example by singing “This Is My Song”

“This is My Song, O God of all the nations.
A Song of peace for lands afar and mine.
This is my home, the country where my heart is;
Here are my hopes, my dreams, my holy shrine;
But other hearts in other lands are beating
With hopes and dreams as true and high as mine.”

May that song and Mary’s spirit help us all to be better caregivers for this precious world in which we live!

Knesset Member to Speak in Conn.

Speak Out for Palestinian Lives