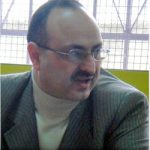 George Saadeh, a native of Bethlehem, Palestine, has a B.S. degree in Aerospace Engineering from the University of Southern California. He is the principal of the Shepherd’s Field Greek Orthodox School in Beit Sahour and has served as the Deputy Mayor of Bethlehem. On March 23, 2005 his 12 year old daughter, Christine, was shot and killed by the Israeli army at a checkpoint in Bethlehem while she was in the back seat of the family car. He, his wife Najwa and his daughter Marianne were all seriously injured as well. Since then, George and Najwa have been members of the Parents Circle Family Forum (PCFF) which brings together bereaved parents, both Israeli and Palestinian, who have lost children because of the conflict. The members of the Parents Circle, an organization of Jews, Christians and Muslims, have resolved to be in a community of mutual support. George’s daughter, Marianne is a graduate of Bethlehem University in Palestine with a major in Sociology. She works in a family clinic and has co-edited the book, A People Without A Country – Voices From Palestine, AuthorHouse, 2011. George has welcomed numerous Tree of Life delegations in which many have benefitted from his gentle and powerful voice of conscience. Here in the US, a number of Tree of Life audiences have had the honor of meeting George and his extraordinary family.