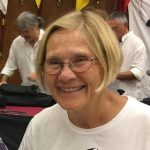 Col. Ann Wright, a retired colonel in the US Army, as a matter of conscience, has been an outspoken opponent of the Iraq war, and wherever there are struggles for justice and human rights, one can see the indefatigable spirit of this woman. As a Captain in the Gaza Flotilla, Ann helped the world to see how the State of Israel, aided and abetted by our own country, has turned the Gaza strip into the world’s largest open-air prison. From Pennsylvania Avenue to the campfires of Standing Rock, Ann has distinguished herself as an unfailing voice of conscience. We were very honored to have her speak for our Tree of Life series a few years ago. I think of this “retired” Colonel, and I think of the poem “Ulysses” by Tennyson. Think of her plying the waters of the Mediterranean, sailing toward Gaza, saying, “Come my friends, tis not too late to seek a newer world.”