This was the Tree of Life Educational Fund’s second labor union delegation trip to Israel/Palestine. Among our eleven travelers were members of several labor Unions including the International Association of Machinists (IAM), Laborers International Union of North America (LIUNA), American Federation of State, County and Municipal Employees (AFSCME), the former Political Director of the National AFL-CIO, as well as two labor lawyers. 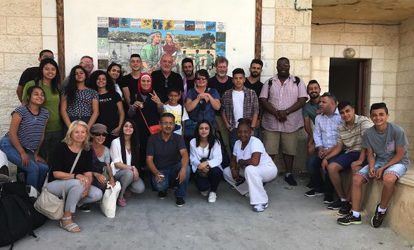 Each traveler committed to a three-part covenant. The first part required reading and learning about the history of Israel/Palestine before the trip. The second included agreement to travel in humility and to listen to the voices of conscience with whom they met. The third is to honor those voices of conscience by amplifying their social justice messages upon return to the States. Given the imbalance of media coverage on this subject, and Congress’s inattention to the human rights abuses suffered by the Palestinian people, and it’s ongoing unconditional monetary, military and political support for the State of Israel, the delegation views the third part of the covenant as most critical.

Below are examples of the labor delegation’s initial efforts to honor the third part of the covenant by sharing some of what they learned during the nine-day trip to Palestine and Israel with U.S. Senator Richard Blumenthal.

Since 2003 the Tree of Life Educational Fund has organized interfaith journeys to the Holy Land.